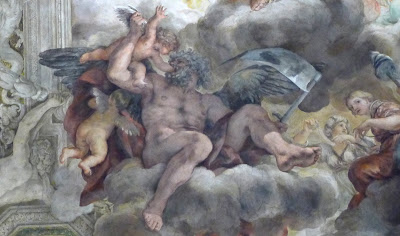 I believe artists have their very own way of perceiving time and of representing it through their works of art. The image above is a detail from the magnificent early baroque fresco by Pietro da Cortona (1596-1669) found in Palazzo Barberini in Rome.  Chronos (the personification of time) is shown devouring his children.


The primordial deities Chronos along  with Ananke (personification of destiny, necessity, and fate) marked the beginning of the cosmos and brought about the creation of the ordered universe.  It seems that Ananke represented a universal principle of natural order, which controlled all fate and circumstance of mortals, and was far beyond the reach of the younger gods whose fates she was sometimes said to control.  Simonides (556-468 BCE) once wrote: "Even the gods don’t fight against ananke"
Tyche on the other hand was the goddess of luck venerated at Itanos in crete and later by Romans as Fortuna. In medieval art she was also depicted as the wheel of fortune or standing on the wheel, presiding over the entire circle of fate.
Norbert Wiener in his book “cybernetics” presents Ananke as the personification of scientific determinism, contrasted with Tyche as the personification of quantum indeterminacy;  "The chance of the quantum theoretician is not the ethical freedom of the Augustinian, and Tyche is as relentless a mistress as Ananke."
Paintings do not need to represent Chonos or time to relate to the subject of time, in fact some paintings can through the use of symbols or “simply” through a sense of aesthetics communicate to us or enlighten us on truths that might be very difficult to express by other means.
Since the 1970’s it is a well accepted fact that artists use the right hemisphere of their brain more while creating their art. Artists are able to switch to a nonverbal, non-temporal, special, intuitive holistic mode. This subject was explored in depth by Betty Edwards in the late 70’s. I have experienced this briefly myself when I’m immersed in my drawings.
In twentieth century art Salvador Dali (1904-1989) comes to my mind. The surrealists were well aware of how Freud used the psychoanalytic device of free association to trace the symbolic meaning of dream imagery to its source in the unconscious, Dali applied the same method to his pictorial imagery. 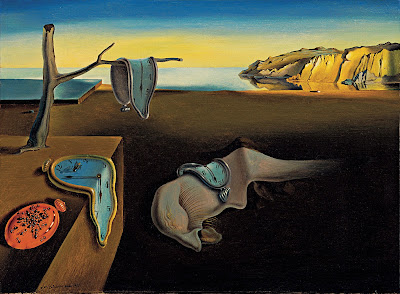 The above painting “The Persistence of Memory” is a good example of how psychology and spirituality come together aesthetically to represent  Transcendental Time.


From a paper by art critic Martin Reis:
“The Church thought of time as eternity, citing Thomas Aquinas's Summa theologiae where he compares completeness, perfection, and infinity, to God. The deep perspective in Persistence suggests time past, with the viewer deserted and lost in infinity. Interestingly, Salvador ("Saviour") Dali's anti-clerical bias is reflected in his use of Christian and Freudian images in the painting; and as if to emphasize the reality of his hallucinations, his surreal iconography is placed in the landscape of the bay at Port Lligat on the Costa Brava, his home and studio. Although he describes the origin of the soft watches as derived from dreaming of Camembert cheese, Marcel Jean, in his History of Surrealist Painting, says they symbolize impotence: montre not only means "watch" in French, but is also the imperative form of the verb montrer, "to show". A sick child must show his tongue to the doctor, montrer la molle, which sounds the same as la montre molle "soft watch". Usually we think of these bent watches as referring to Einstein's theory in which our world is becoming a spatio-temporal continuum; the world's concept of time and space was certainly changing. The three open and vulnerable watches (past, present, future?) are within orthogonals which point to the top center of the painting (heaven?). According to Freud, menstrual periodicity transforms the concept of time into a feminine symbol, and the fourth watch, closed, hard and impregnable, has been diagnosed as a feminine symbol. Certainly this watch in the foreground is a vital red, while the middle ground watch is softened to orange and the background timepiece is a lifeless gray.
Ants usually suggest putrefaction and decay; the rigid watch is attacked by scavenger ants, indicating the inorganic is becoming organic and vulnerable. However, since the watch is closed and red with life, time is unattainable and the ants attack without success, implying triumph over death and decay via procreation or immortality. In Christian doctrine, ants signify provident man, the one who chooses the true doctrine and rejects heresy. The fly, on the other hand, has long been considered a bearer of pestilence and evil (Lord of the Flies, or Beelzebub, is from Ba al-z' bub, lord + fly, a god of the ancient Philistines, averter of insects). In Christian symbology, the fly symbolizes evil.
The amoeba or fetal image suggests the primordial beginnings of life, and like a lost soul in infinity, is stranded on a barren beach with its life-giving water (holy water?) in the far distance. This fetal image, usually interpreted as a self-portrait, appears in several other paintings, including The Great Masturbator. The soft tongue, similar to the limp watches, is a well known Freudian symbol for the penis; Dali, in his Secret Life of Salvador Dali, makes public his anxieties about sexual dysfunction. Trees, tall and erect, are male, according to Freud; but this tree is scrawny and lifeless. The extending phallic branch, with its post-coital watch, points to rock formations which in actuality are the granite outcroppings above the Bay of Cullero near Dali's home. "Geology has an oppressive melancholy," stated the artist, "this melancholy has its course in the idea that time is working against it." Again, the rock is a symbol of Christian steadfastness, and suggests the antithesis of the biological objects which are subject to the laws of change and disintegration. According to medieval Christian legend, the Tree of Knowledge of Good and Evil withered when Adam and Eve ate the forbidden fruit. Thus the dead tree in Giotto's Lamentation, della Francesca's Resurrection, and Michelangelo's Fall and Expulsion, all refer to original sin, otherwise known as Freud's Oedipus Complex. The cubes on the left may possibly have some reference to Cubism, although again, they are symbols of stability in Christian iconology. Ants, the fly, yielding watches, fetus, open horizon, all suggest the transitoriness and impersistence of time.”  - Martin Reis, 1991.
On the Time Triangle I would place artists on the Transcendental Time axis on the opposite side of SCIENCE, not because they cannot express scientific knowledge (on the contrary) but because their approach is so radically different. (see the next article for a decription of the triangle).
article by Francesco Ruspoli

Email ThisBlogThis!Share to TwitterShare to FacebookShare to Pinterest
Labels: Time in art