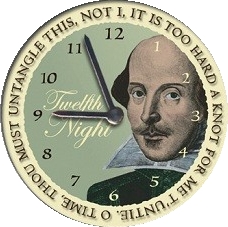 
SONNET LX
Like as the waves make towards the pebbled shore,
So do our minutes hasten to their end;
Each changing place with that which goes before,
In sequent toil all forwards do contend.
Nativity, once in the main of light,
Crawls to maturity, wherewith being crown'd,
Crooked eclipses 'gainst his glory fight,
And Time that gave doth now his gift confound.
Time doth transfix the flourish set on youth
And delves the parallels in beauty's brow,
Feeds on the rarities of nature's truth,
And nothing stands but for his scythe to mow:
And yet to times in hope, my verse shall stand
Praising thy worth, despite his cruel hand.
article by Francesco Ruspoli No comments:

There is an incredible variety of ways people perceive the flow of time. Linear time for example is pretty straight forward (no pun intended), it can be seen as a straight line in which time flows forward, but many questions arise with this model; why can we only perceive the present?  is it possible to jump to a different part of this line ? can time flow backwards on this line ?
We often assume the past is behind us and the future lies ahead but recent studies have found that not everyone perceives time in this way. The Aymara people in the Andes for example point in front of them to indicate the past and wave behind to indicate the future. Probably because the past was seen but the future is unseen. The Pormpuaaw people in Australia perceive a timeline running east (past) to west (future) so where they point depends on where they are facing. In China it not uncommon to represent time on a vertical axis with the past above and the future below and for the Yupno people of Papua new Guinea Time flows uphill and is not even linear. The past is downhill towards the mouth of the river and their timeline is anchored in the kinked topographic properties of the river.
In fact the representation of the timeline as a straight line with the years along its axis is quite recent one. Its use only became diffuse in the mid 18th century. So though culture certainly plays an important role in our perception of time I think there is an evolution in the way we perceive time. And this evolution is leading us to a better understanding of what time really is.
article by Francesco Ruspoli No comments: